This document is for developers who would like to contribute to the development and maintenance of Photino.

Photino is an Open Source, community project, backed by CODE and other sponsors. The majority of bug fixes and enhancements rely on a healthy community of contributors to ensure that Photino stays relevant and viable for a long, long time.

Photino maintains two branches for the photino.Native, photino.NET, and photino.Blazor repos: master and debug. The master branch is used only for public deployments to NuGet.org. The debug branch is for all development and has an integrated CI/CD pipeline (implemented in Azure DevOps) which publishes debug builds of the NuGet packages to DevOps. Please use the debug branch for all branches and pull requests. Pull requests into the master branch will only be accepted from the debug branch.

Photino maintains two projects for the photino.Native, photino.NET, photino.Blazor, photino.Samples, PhotinoSamples.VSExtension, and PhotinoSamples.VSCodeTemplates repos. One named Bugs for issues that are not enhancements, and one named Enhancements for everything that is not a bug. New bugs and enhancements entries are evaluated and prioritized weekly when possible.

Pull requests into the master branch of repos without a debug branch will occur at least monthly.

The photino.Samples repo contains projects which use the publicly released NuGet packages for Photino.NET. They are used as the source for the project templates for Visual Studio: PhotinoSamples.VSExtension and for the dotnet CLI (with or without VS Code): PhotinoSamples.VSCodeTemplates.

The PhotinoSamples.VSExtension repo is used to produce a Visual Studio (2019 or later) VSIX extension containing project templates for all of the photino.Samples projects. See Photino VSExtension for guidance on creating and publishing these templates.

The PhotinoSamples.VSCodeTemplates repo is used to produce a NuGet package which can be used by the dotnet CLI to install project templates for all of the photino.Samples projects. See Photino VSCodeTemplates for guidance on creating and publishing these templates. 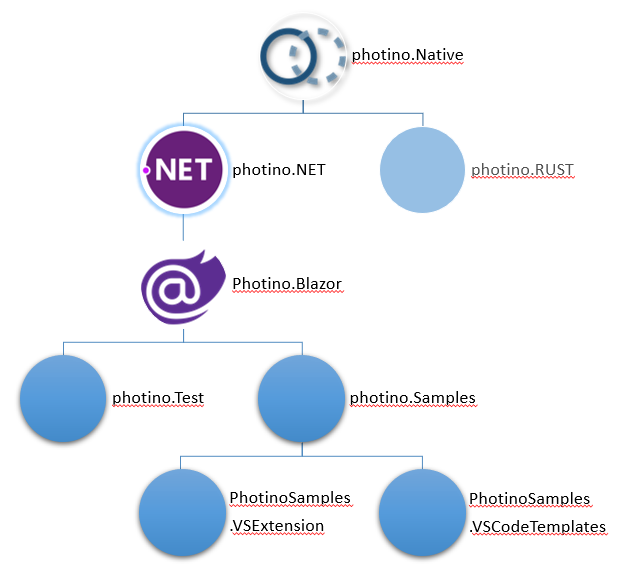